For Immediate Release 22.11.19 – HIV+ Coalition launches against the Hostile Environment

A new coalition of HIV and healthcare movements have joined forces to tackle the Conservative Governments ‘Hostile Environment’ policy direct and tragic impact on people living with HIV+ to be launched on this World AIDS Day.

The launch show is ‘HIV HEP Blind Date – Exit from Fear – Let the Love Shine Through’. Through contests, performances, surprises, satire, quiz shows, dance party tunes by special guests the confronts the barriers that stop people living with HIV+ from achieving full healthcare and happiness. The night is a celebration of LOVE, UNITY and COMMUNITY for everyone who deserves, particularly those on the frontline of hostile stigma and austerity. 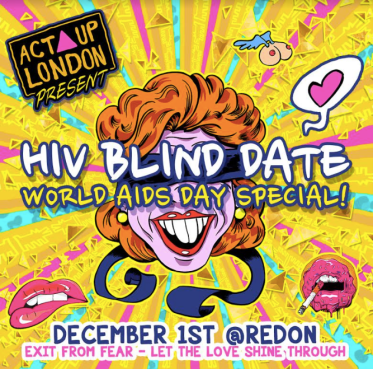 Last week, ‘Anthony Browne the former aide to Prime Minister Boris Johnson said ‘African immigration has overtaken gay sex as the main cause of HIV in Britain’ . With bigoted comments like this Government’s Hostile Environment that regularly detains HIV+ migrants without access to medication – wants people with HIV+ turn against each other and hide away in fear.

Edwin Sesange, African Equality Foundation said ‘We believe the time is now for all stakeholders in the fight against HIV to come together to challenge  the badge of HIV shame and stigma among our communities more importantly in the BAME community in the UK. As much as there has been progress in science to manage and prevent HIV but there is a growing and worrying stigma and lack of enough knowledge about these progress. At African Equality Foundation, we have witnessed how BAME immigrants face racism, homophobia and HIV stigma, the combination of the three for some people is a deadly state which we don’t wish for any other person to face. Therefore we appeal to the general public to join us in the struggle to bring the above to an end. We  believe progress has to be felt by the people in their small communities and HIV shame and stigma should be a thing of the past. We appeal to the UK government and other governments to categorise HIV stigma as a hate crime such that people can be held accountable for their degrading and demeaning messages towards those living or believed to be living with the virus. This criminalisation will make our fight easier since people will know that there is some penalty. However, the above cannot be achieved if we don’t come together.

‘For another year running I’m proudly taking part in HIV/Hep C blind date, a unique immersive piece of theatre and activism. As gay migrant living with HIV I have a first hand experience of prevalent stigma, both from the politicians and LGBT community. In the current social climate is very important to show solidarity and remind that we’re still here and not going anywhere anytime soon. People living with HIV or HEP C deserve all the love, care and fun. We’ve been to hell and back, and let me tell you it’s been wonderful. Embracing and sharing our truly unique experience of comradeship and empathy is the best way to celebrate World AIDS Day. As a co-founder of the current chapter of ACT UP London I proudly invite everyone to join us on that journey. Keep fighting, keep loving!’ Jarek Kubiak, ACT UP LONDON

Jessica Potter, Docs Not Cops said ‘No health service should be a hostile environment and no health worker should be turned border guard.   Healthcare is a right for all, not a privilege for some. Everyone deserves to feel safe and welcome in the NHS but government policies are hacking away at those rights. At Docs Not Cops, we refuse to stand by and watch as the founding principles of the NHS are undermined. We demand to see #PatientsNotPassports.  Together, as healthcare workers and patients, we stand side by side, commitment to fighting the hostile environment.’

Sam Toogood, Lesbians and Gays Support the Migrants (LGSM) said ‘Detention centres may be out of sight, but they cannot be out of mind. Throughout the hostile environment’s regime, an insidious serophobia quietly denies migrants their right to healthcare. A decade ago the UK signed up to the G8’s pledge of universal access to HIV treatment for all those who need it. Yet this country has consistently pursued a policy of deporting people diagnosed with HIV to countries where treatment is not readily available or affordable. Right now, HIV positive people are being detained by the Home Office, denied access to the medication they need. Doctors are kept in the dark about their patients’ whereabouts, and without their condition deteriorates severely. Lesbians and Gays Support the Migrants demand an end to the hostile environment, and an end to the HIV stigma that permeates it.’

‘Doctors should never become border agents, all patients should be treated equally and healthcare is a human right for all. ACT UP! FIGHT BACK! UNTIL THERE IS HEALTHCARE FOR ALL!’ dan glass, ACT UP LONDON

‘I am involved because I want to remove HIV stigmas from British born Bangladeshi community and also from Bangladeshi gay community back in my country.’ Mazharul Islam

‘I’m HIV negative and on PREP. I’m taking part in ‘HIV HEP Blind Date to remember those that I’ve lost and loved and to say that there should be no stigma and shame in loving and shagging people with HIV/AIDS/HEP. We have PREP, we have condoms and we can inform ourselves about people using meds /undetectable viral load that means that people living with AIDS can not pass on HIV.’ Jack Ash

‘I’m an HIV negative bisexual men from a tribal rural area Balochistan, North of Pakistan. There is a stigma in Muslim countries that HIV can be spread through sharing a plate of food with a person who have HIV and even if you are supporting someone with HIV its contagious. People don’t know it’s not a disease it cannot be passed on. Undetectability and PREP now mean HIV people have a normal life expectancy. I have been living in the UK for almost 9 years and stigma has not changed. The mentality is the same.’ Mir Maqsood Ahmed Lehri

‘I am involved to raise awareness about Prep and challenge stigma of folks who are positive.’ Alex Molano, ‘HIV – HEP Blind Date glamorous assistant’.

“People living with HIV are terribly impacted by mental health problems, according to Positive Voices a research by PHE:  40% of people with HIV have received a mental health diagnosis, and loneliness and isolation have been identified as critical issues affecting the quality of life. The cuts which have caused the closure of so many  HIV social support services, mean that many people are facing mental health crisis alone with no hope of accessing life saving support. “ Silvia Petretti, Interim CEO,  Positively UK

“As a HIV poz undetectable survivor of almost 10 years, the HIV Hep C Blind Date is a vital space I only wish had existed sooner growing up positive in a negative world. Join ACT UP as we wreck glorious glamorous political havoc on World AidsDay – and you might even find a little love in the fabulous process!!” Sebastian Hau-Walker ‘HIV – HEP Blind Date glamorous assistant’ 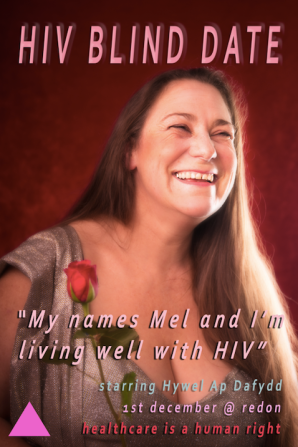 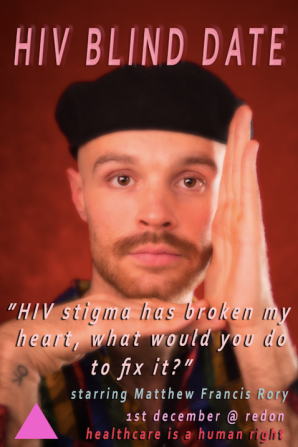 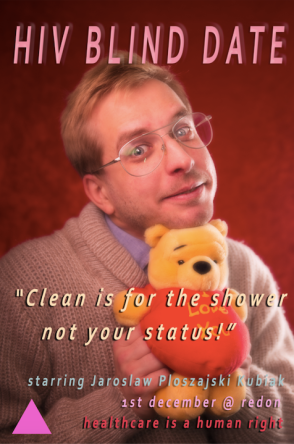 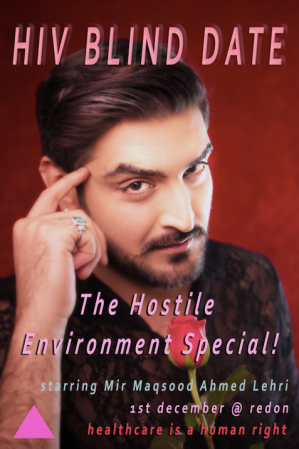 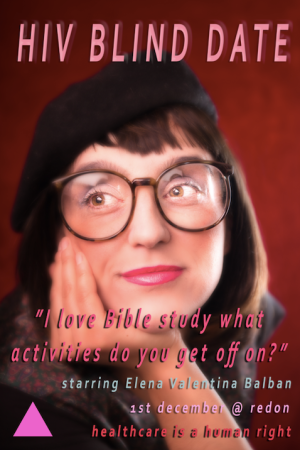 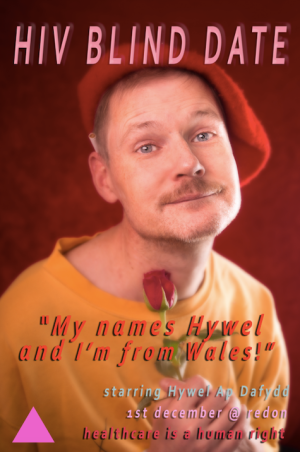 TICKETS HERE:  Unwaged / Early Bird – £5 Broke £7.50 Standard £10 Solidarity £15. A large handful of free tickets are for HIV+ migrants and for HIV+ people struggling with housing. If this is you and / or you have any issues being able to afford the ticket please email us ASAP.

ACCESSIBILITY: The venue is fully accessible. There will be Cilla’s glamorous assistants at your service all night should you need anything.