Can you help get the Virgin Scare Health Hostesses to the Tory Party Conference? There’s been a serious outbreak of sickness of the soul amongst the Conservatives, can you help get the crew to Manchester so we can check their empathy levels in person. As you can see, this crowdfunder video is entirely home-made. This is because we have no cash, unlike Virgin Care, who have conjured lots of cash from the public purse, and spirited most of it away to the British Virgin Islands, with their amazing (perfectly legal) tax dodging circus skills. Every penny counts – please share widely.

PLEASE DONATE TO THE CROWDFUNDER HERE

An interactive, street theatre and new writing project, led by professional artists and ACT UP activists that will be performed at the Conservative Party Conference.

We demand:
– An end to the deliberate underfunding of the NHS
– A closure of the internal market, putting a stop to the increasing marketisation and privatisation of the NHS
The return of funds to the NHS taken from Virgin lawsuits
An end to the use of tax havens by any company contracted by the NHS
– We will be bringing the VIRGIN SCARE HEALTH CHECKS to the Conservative Party Conference:

Virgin Scare Health Checks is a modern-day dystopian tragedy and camp spectacle created by the drag harbingers of fiscal human tyranny. The script is adapted from Virgin’s very own PR department, and delivered through a sequence of choreographed performances.

And what will happen when an outbreak of a deadly supervirus threatens all aboard?

Can the negligent, responsible passengers be quarantined?

Fear not, shareholder profits will be delivered safely to the British Virgin Islands via the global banking system. But will anyone survive the emergency crash landing?

Virgin Scare Health Checks will be a highly interactive, community-driven performance and new writing project, led by ACT UP activists, that will be performed at the Conservative Party Conference in September 2019, it will be accessible to the public through street theatre and online videos

The performances will question the impact of the segregation of our healthcare system. We encourage those who access the NHS to act on its behalf, and save it from the swindlers.

The NHS Anti-Swindle Team are an ACT UP LONDON campaign group. We are a grassroots collective of artists, activists and mischief-makers who use creative civil disobedience to fight for a publicly run NHS and oppose all forms of private company control in the NHS, with a particular interest in the racketeers who are profiteering from ill health. Check out our video about Virgin Care. 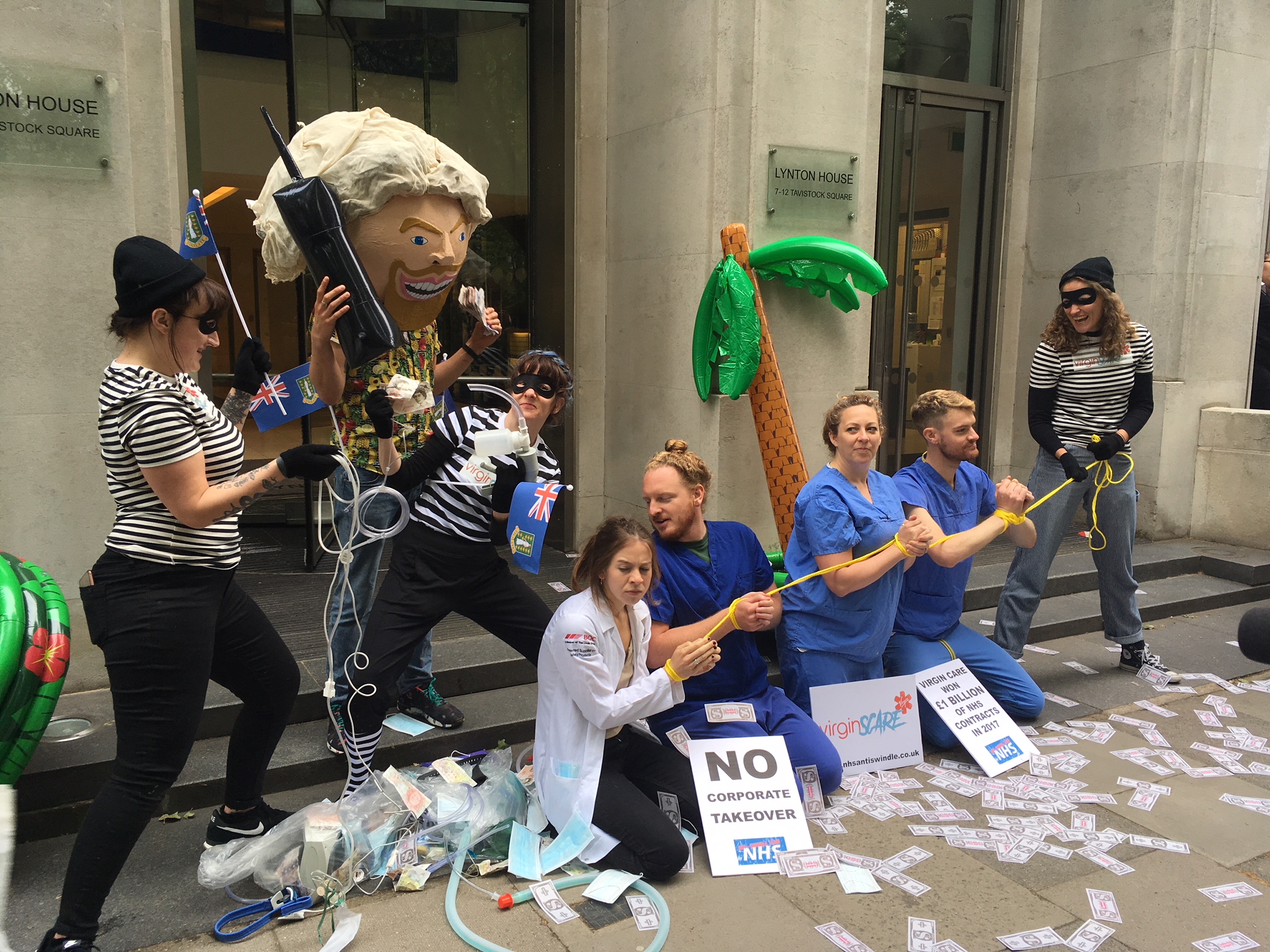 In 2018… The NHS Anti-Swindle Team protested Virgin Care’s takeover of NHS contacts and their complex tax affairs outside Virgin offices.

We held a birthday party outside the Department for Health where we sliced up the NHS cake. 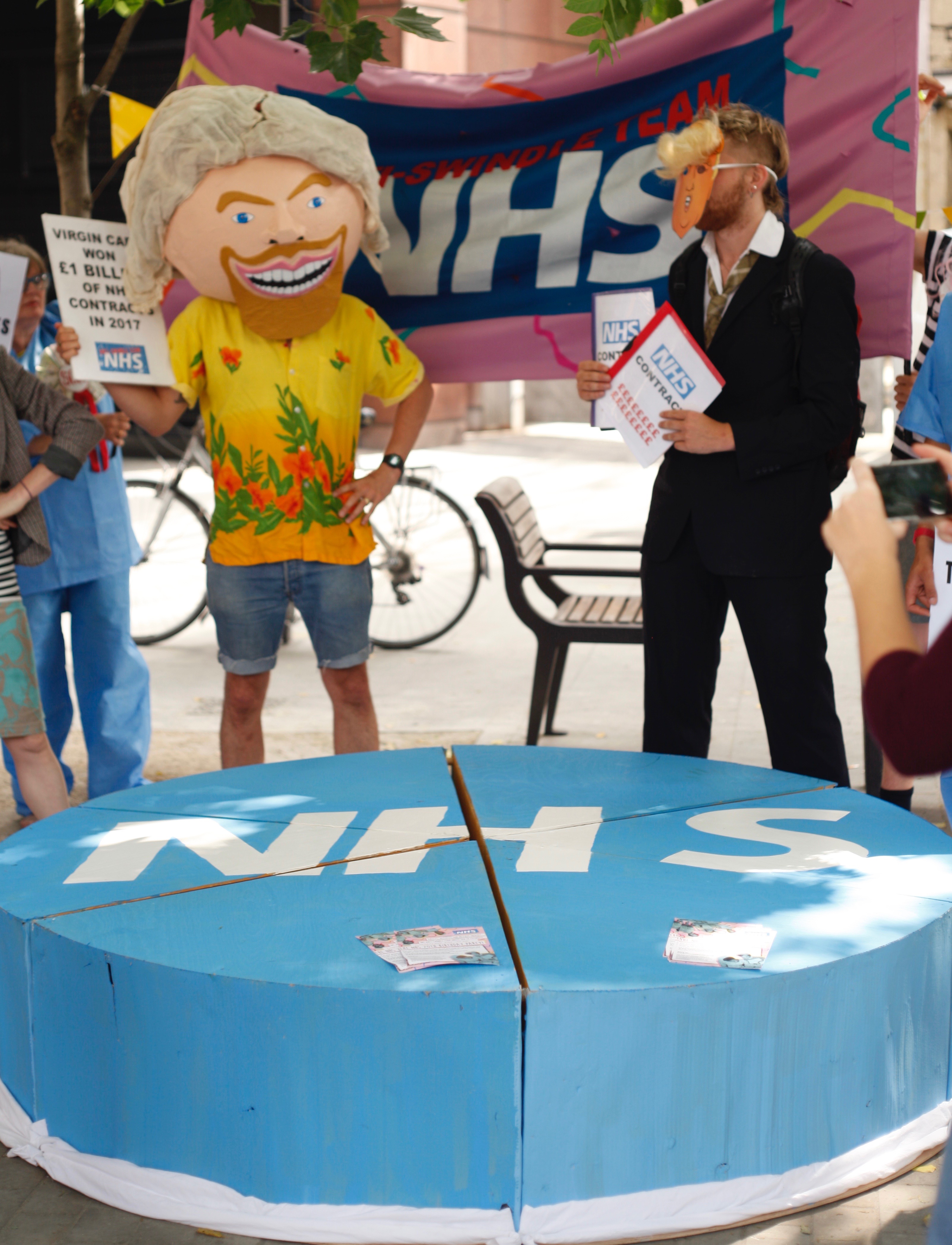 We wrote and performed a song with Sam Lee’s protest group the Fire Choir.

We held a Privatisation Auction from the NHS Confederation Conference with the Greater Manchester Keep our NHS Public and the People’s Assembly Manchester. 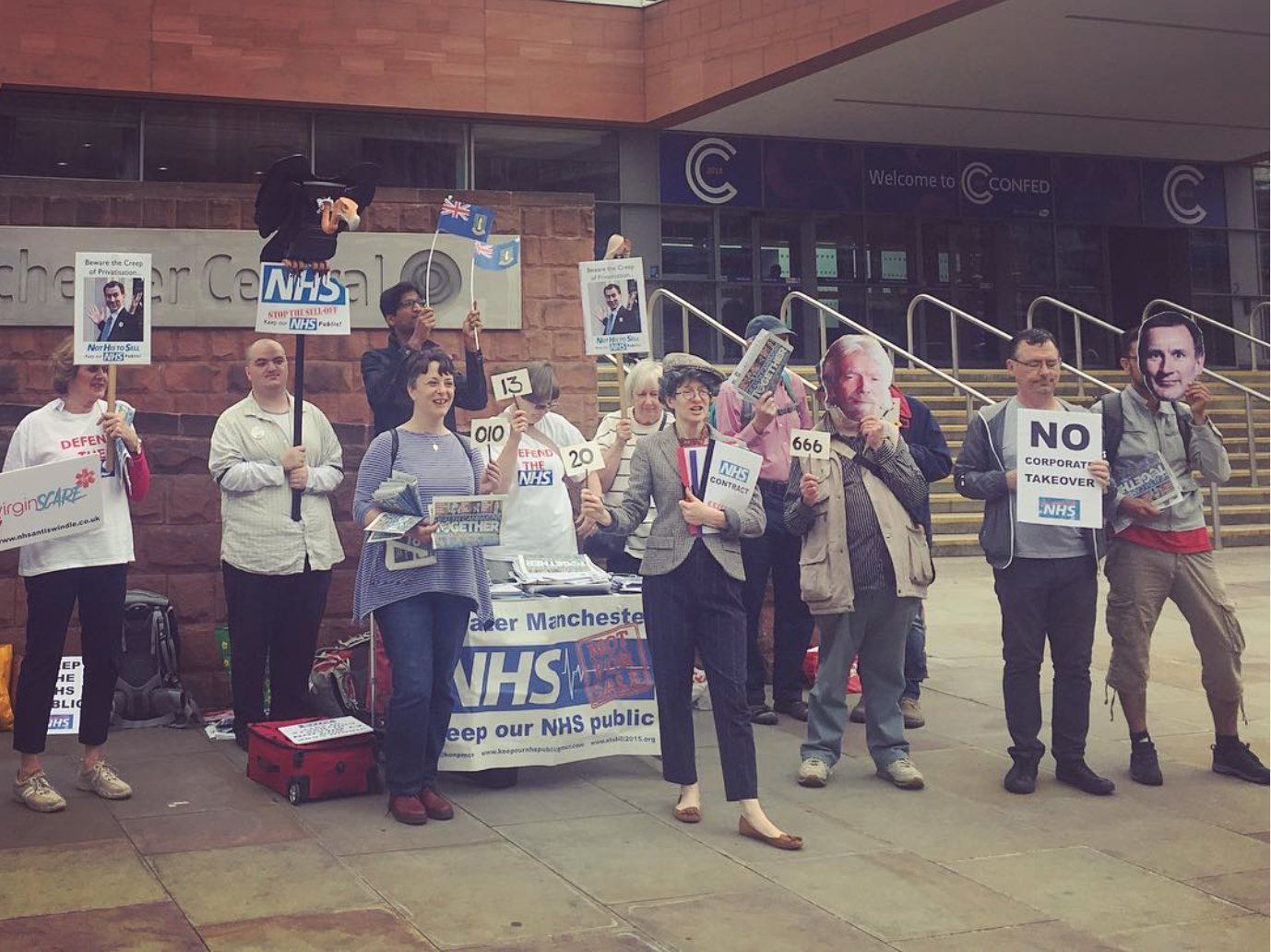 Dropped a banner with Docs not Cops outside parliament, calling on the government to end the hostile environment within healthcare. 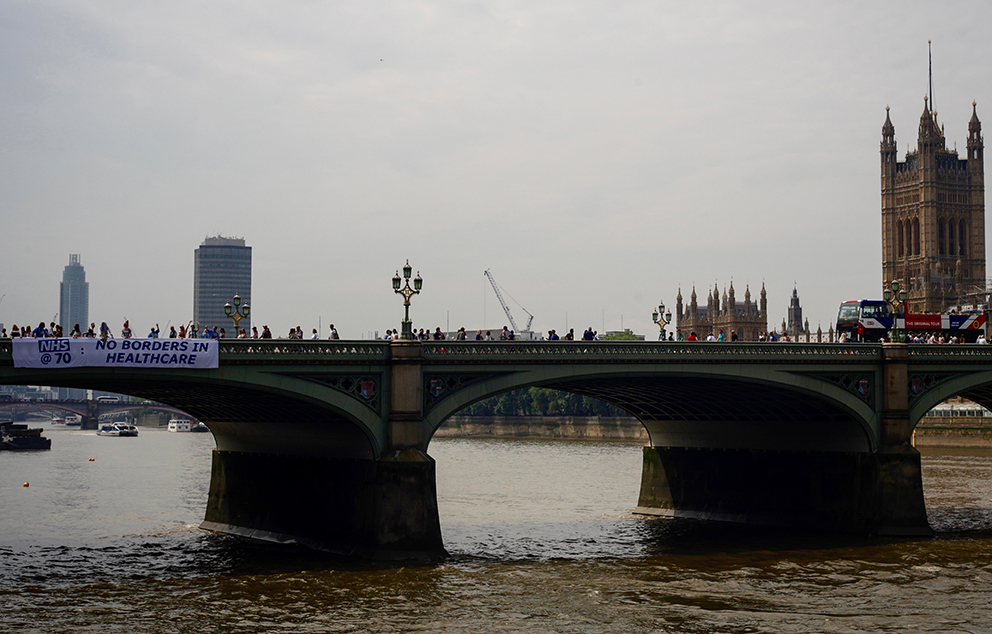 This year, with your help we will be taking to the streets with highly interactive performance protest that continues to highlight the privatisation and marketisation of our healthcare system. 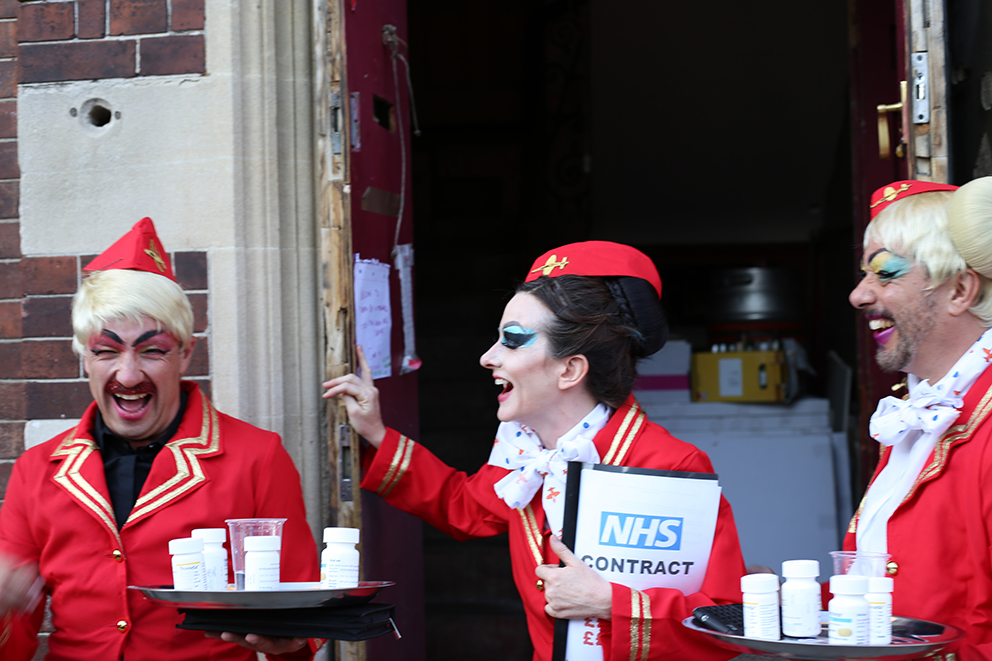 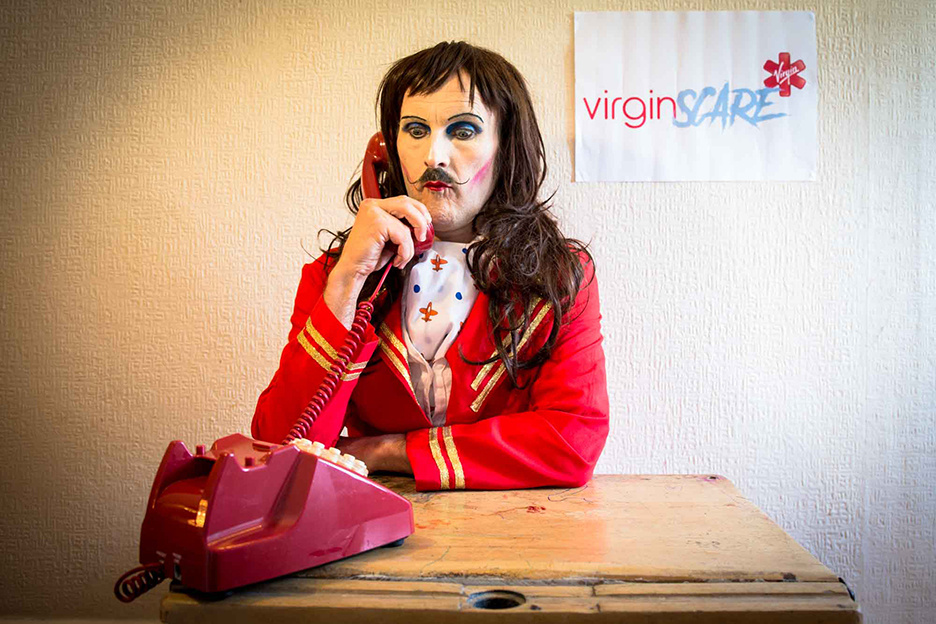 ACT UP London Activists – The original creative activists, fighting for healthcare not wealthcare since 1987

WE HAVE NO CASH – unlike Virgin Care who have loads.

Can you help us?

WHERE DOES YOUR MONEY GO?

The scope of this project requires funding to pay the creative team, make costumes and rehearsal space. We need your help to make this happen.

3 actors £1500 for 5 days work – to write, devise, perform the show and teach the routine to others.

* If donations go above the allocated target we will increase the amount of performers.

* If donations fall below the target we will decrease the amount of writing and rehearsal.