On March 7th, Anna, Hywel and Mir from ACT UP London attended ‘Living with HIV: challenges, stigma, activism’ in Leicester. The evening consisted of a roundtable discussion on the challenges of living with HIV, followed by a screening of Angélica Cabezas Pino’s film “This is my face”.

Key speakers consisting of academics, activists, charity workers and service users shared their knowledge about and experience of HIV. We shared information about the formation of ACT UP, its current activities in London and how others can get involved with direct action to end the HIV pandemic. Mir also spoke about the challenges of being gay and of having HIV in Balochistan.

Angelica’s film followed the experience of several men living with HIV in Chile. In Chile, those living with HIV are often reluctant to share their diagnosis due the stigma surrounding the virus. The film revealed the internal hidden dialogue of the men and their experiences.

The men in the film were asked to take several photos, recreating poignant moments on their journey with HIV. One man took photos of his mother cleaning the bathroom with bleach, something she did every time he used the bathroom after his HIV+ diagnosis. Later, he took a photo in which he lay his head in her lap. He spoke to her of how she was often reluctant to show affection, even though he often wanted to hug and kiss her.

Another man took a photo mirroring a picture taken years earlier, of him kissing his daughter. He said the photo was poignant as he was diagnosed with HIV when his daughter was three months old. Due to lack of understanding of the disease, he felt he was unable to display physical affection toward her for many years.

The film culminated with the men displaying the images they had taken in an exhibition and speaking openly about their experiences. Their ability to do so was remarkable, considering they had previously hidden their HIV+ diagnosis from those closest to them.

After the film screening, there was a Q and A with the director and a chance to network. We spoke with the head of Hi5 in Leicester (a HIV support service for gay and bisexual men living with HIV) who expressed and interest in setting up an ACT UP Leicester. We also spoke with another attendee who felt engaging with direct action and activism may affect his career. He didn’t want to risk losing his job if involved with a high profile action. We suggested he could focus on events such as HIV Blind Date, focused more on empowering the community than on exposing and shaming those who perpetuate inequality and oppression in our community and society at large.

It was a great evening! 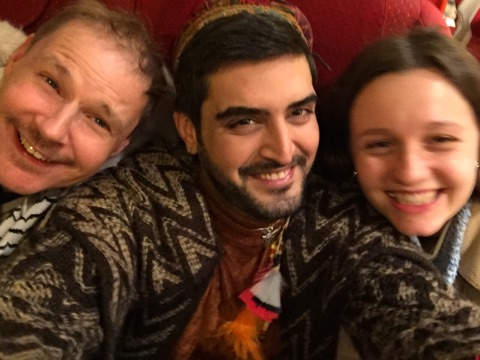