1986 – Remember when Chief Constable of Greater Manchester Police James Anderton, backed by Margaret Thatcher, said “homosexuals, drug addicts and prostitutes who had HIV/AIDS were – swirling in a human cesspit of their own making”?

1987 – Remember when every single household got a ‘AIDS – Don’t Die of Ignorance’ leaflet through their door?

1988 – Remember when ‘Section 28’ prevented schools from teaching about homosexuality and how in 2008 HIV+ children were turned away from schools?

1991 – Remember when Whitney Houston led thousands of Londoners to Trafalgar Square as part of the epic HIV – Vigil?

2017 – Remember how successes like the introduction of Pre-Exposure Prophylaxis (PREP) has halted diagnoses amongst gay men today but HIV+ stigma for heterosexuals is still as isolating as ever?

Everyday – Remember how National Health Service (NHS) nurses, doctors and users continually put their lives on the line to protect the HIV+ community?

Remember the tragedy, sex, desire, isolation, activism, hate and love which have made the story of the HIV+ epidemic at the heart of the story of modern London?

Well join the ‘BANG BUS – World AIDS Day Special’ an immersive theatre bus-tour of London journeying through the decades and places to bring the history of HIV+ in London to life. The BANG BUS is a literal and metaphorical vehicle for creative and radical social change. With the nurses, community activists and surprise guests at the heart of changing the HIV+ epidemic the BANG BUS – World AIDS Day Special’ serves to harness history to strengthen the fight today to protect the NHS and to demand a permanent AIDS Memorial in London. Read more about the BANG BUS here!

Profits go to ‘Keep our NHS Public’ and the ‘John Mordaunt Trust’.

Are you an HIV+ or healthcare or ‘protect the NHS’ related organisation / community group who exists in spirit of the BANG BUS – World AIDS Day Special?

We would love to collaborate and weave all our stories of HIV+ in London on the BANG BUS. We are ringfencing tickets for group bookings now.

The bus is fully wheelchair accessible. Priority seats go to those living and loving with HIV+ and anyone involved in the protection and upholding of the values of the NHS. 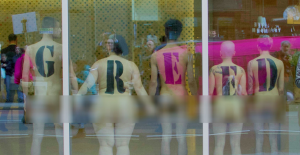